This guide will look at some of the frequent questions that Disc Priests have in Raids and Mythic+, as well as how to best mend them. These sections are just a start so if you can't find the answer for something and think it deserves addition on this page, please comment so I can address it!

How does Atonement work?

How do I know my ramp was good?

A very frequent issue with many Disc Priests is their failure to ramp properly and early enough. The WoWAnalyzer site does an excellent job of highlighting some key areas that are a bit harder to pinpoint in WarcraftLogs. One of the big areas, pictured below, is your Evangelism effectiveness. While the HPS contribution can be important to look at, one of the most helpful areas to identify is the specific Atonement duration extensions that the Priest casts each time. As a general rule of thumb you will be looking for ~15 Atonements to be extended each Evangelism 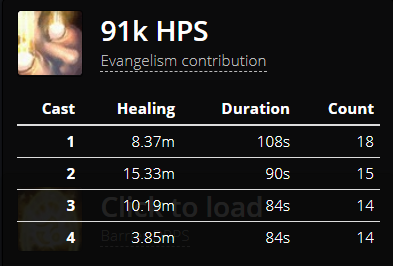 While working on maximizing Evangelism it is absolutely key to study and understand the boss encounters before you enter them. As described in the raid tips section, studying video guides, utilizing a combat timer, and emphasizing key boss ability timers or energy levels is imperative to properly timing your Evangelism. Once you do so, a smaller problem that is quite common is a poor or mixed follow through after the Evangelism cast.

WoWAnalyzer also highlights the cooldown usage of Disc in a concise format. In this situation however, the formula is not as cut and dry as Evangelism was above. Cooldown usage for Disc should be frequent but also should be well timed. Often the players can operate the spec the correct way but still see that their cooldown usage looks ineffective. When looking at this rating in WoWAnalyzer or WarcraftLogs often it is good to use the Replay Feature or Casts Tab to look at when precisely you casted certain abilities. If the tool states that you used Rapture ineffectively for example, it often can pay off to go to the Cast tab, select only Rapture in the chart and find each use to analyze where damage is going out and even comparing it to the raid wide damage taken chart.

When comparing both windows side by side you will want to keep in mind that Rapture will increase the Shielding of all PWS cast AFTER Rapture. So the first cast of Rapture looks to be very late as it goes out right as the damage ramps heavily onto the party of this encounter. The second cast looks to be well timed before damage, but the Rapture is available for more than 30 seconds by the time it is used. This can be a good use if your group has a particular issue with a mechanic or raid wide damage, so that looks to be more situational.

The final cast occurs significantly later in the fight and does so because of how late the second cast was. The second cast of Rapture was so late that it would be very difficult to immediately hit Rapture when it returns shortly after 5 minutes, then get another use just as the fight is ending around 6:45. Being able to identify and break down the areas where your cooldown usage can actually have long-standing repercussions is imperative to understanding log analysis.